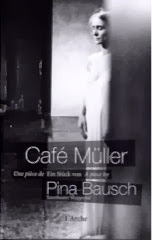 "Dance, dance, or we are lost."  So said German dance choreographer, Pina Bausch, one of the leading pioneers in modern dance.  I was first introduced to this most fantastic woman through Wim Wender's 2011 film, "Pina".  In this film you get a sense of her magnificence and appeal through her dancers in both their performance and that which they say about her.  What also stuck with me was the realization that movement is the language of dance, and more importantly that movement is not its essential element; its essence is the inner longing that drives the movement.   My exposure to Pina Bausch made me look at dance differently and to appreciate it more, to understand that it gives us a "hint" of something.  And that hint then becomes the starting point in the quest for understanding.  As a result of this exposure, I can say that the works of the Alvin Ailey Dance Company has taken on greater significance and meaning for me.

So enamored was I with Pina Bausch's craft that I began to research her some more.  I landed upon her 1978 "Cafe Muller", a dark, beautiful, and tantalizingly haunting piece that mesmerizes, captivates, and frustrates at the same time.  She also performs in this piece.  There is something going on in the foreground and center, as well as on the periphery and in the background.  But it was the movement in the background that particularly caught my attention, causing me to wonder whether that were not the most important element being presented in the piece.   What an amazing woman!  What an amazing artist!
Posted by Ric Couchmam at 3:14:00 PM
Email ThisBlogThis!Share to TwitterShare to FacebookShare to Pinterest