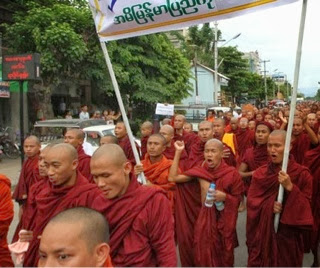 You had better believe it!  At least the Buddhism that in practiced in the state of Rakhine in Myanmar (formerly known as Burma).  I was quite surprised when I learned about this.  I had always associated Buddhism with non-violence and peace.  Imagine my surprise when I found out that the 969 Movement, a Buddhist movement in Mayanmar has been involved in perpetrating extreme acts of violence against the Rohingya people in the state of Rakhine in Myanmar.  The Rohingya is an ethnic group linguistically related to Indo-Aryan people in Bangladesh and India.  They practice Islam, one of the reasons for their persecution by the Buddhists in Rakhine.

According to the United Nations, the Rohingya are one of the most unwanted and persecuted people groups in the world.  They are denied citizenship, education, employment, and other basic human rights as policy by the Mayanmar Government, and over the years many of them have been killed and their women raped.  Not only are they unwanted in their own country, but refugees fleeing to neighboring Bangladesh and Thailand are denied entry into those two countries or forcibly turned back at sea.  Last week as many as 60 members of the Rohingya Muslim minority were killed, prompting the United States and the United Nations to ask the Mayanmar Government to launch an investigation into the killings.