"Fear of a Black Messiah" - My Response 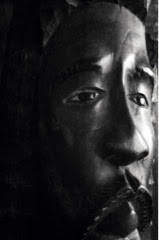 Recently, a friend of mine shared with me on Face Book an article by Ewuare X. Osayande titled "Fear of a Black Messiah". Many, including my friend, thought it was a good article. I didn't think it was...but who cares what I think. The following was my response:

"White racial anxieties reached a fever pitch in 2013."? And then three episodes (I assume among amorphous others) are presented to support that statement, none of which offer any clear evidence in support of that statement?  I saw the Laura Green (who happens to be black) interview of Reza Aslan when it occurred, and while it was clear that she had difficulty accepting that a Muslim would be able to write about the historical Jesus, the interview (though a ridiculous and laughable display in journalism to say the least) offers no evidence that the underlying motivation for the attack was Jesus' identity. That is reading quite a lot into the interview.

Secondly, with regard the second episode that Osayande presented, there was nothing in Judge Lu Ann Ballew's ruling that suggests that she made her ruling based on that which the writer assumes she might have been thinking: "Who do you think you are to name your black child after my white Savior?” Again, that is reading a lot into the judges ruling for which she was rightly sanctioned for religious bias.

As to the third episode, Megyn Kelly's assertion that Jesus is white does not appear to me to be her "fundamental disregard for the truth, for the facts, for history, itself", but as simple her ignorance of the facts. While racism is still a serious problem in some quarters (and clearly, Osayande should be lauded for reminding us of that fact), the three episodes presented in the article are certainly not evidence of the fever pitch of racial anxieties as Osayande suggests nor do they provide any connection to the white supremacy motif that seems to be at the heart of his article.

I have no problem some of the points that follow the first five paragraphs in Osayande's article, but if those five paragraphs from the foundation or basis for the rest of his argument then the whole structure is compromised.

One other point...the idea of a "black" Messiah means absolutely nothing.  The idea of "messiah" itself has built into it rejection, fear, etc. The "Messiah" whether White, Chinese, Black, Jew, Indian, Indigenous, Mulatto, or of any other race or ethnicity will always be feared and rejected by the political and the religious establishment or be used by those establishment to further their own ends.

[Photographic Art by Ric Couchman]
Posted by Ric Couchmam at 2:31:00 PM
Email ThisBlogThis!Share to TwitterShare to FacebookShare to Pinterest