The Revolution Will Be Co-opted 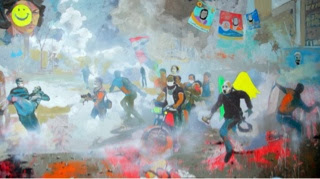 Revolution is like a house on fire.  It erupts in flames, burns for a while, then eventually burns out.  Revolutions come and revolutions go.  They inspire and energize us but leave us empty and with longing once they depart.  A revolution reflects intense disaffection with the status quo.  It may replace the status quo for a while, replacing it with something else which then becomes the status quo that then becomes the object of another revolution.  In some instances the revolution, its themes and slogans, and its various icons become co-opted by the status quo and may end up being commercialized and presented as art or fashion.  It seems that the logical corollary of revolution is the further entrenchment of some status quo.  An example of this is the recent Egyptian Revolution which came out of the Arab Spring of 2010.

This Egyptian revolution, which resulted in the resignation of President Hosni Mubarak and the election and subsequent ouster of Mohamed Morsi's government, is grippingly presented in the recent Oscar nominated documentary, "The Square" (available for streaming on Netflix).  The documentary, while presented from an obvious biased vantage point, gives a close up view of the ideals, dreams, and hopes that drove the revolutionists, as well as their disappointments and despair.  The Egyptian revolution (like many other revolutions before it) came and went, leaving in its place rule by an oppressive Military.  And as often occurs as well with Revolutions, we have a product (the documentary), a work of art, which will presumably garner some individuals fame and monetary benefits.  Ah...Revolutions, Revolutions, Revolutions...They shake things up a bit, then things return to where they were before or even worse.
Posted by Ric Couchmam at 8:13:00 AM
Email ThisBlogThis!Share to TwitterShare to FacebookShare to Pinterest