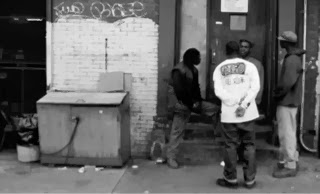 Allow me to introduce K, a young man with whom I worked.  Once I got to know him, I realized that his surly demeanor was simply a mask to hide his own vulnerability.  His warm smile was the true measure of his character.  I remember having many conversations with him, encouraging him not fulfill the statistic of the average young, black man, but to prove it wrong.  Sometimes he showed signs of wanting desperately to disentangle himself from the clutches of the hood, and at other time you could see the defeat and resignation in his eyes.  Success came to him in small spurts.  Struggle and hardship dogged him daily.  He blamed his lot on no one; he took full responsibility for his choices, but the forces he was up against seemed more than he could manage by himself.  The following are his words:

You can call me K.  I dropped out of high school last year.  I also wear my hat on backwards, my pants down around the crack, and sometime speak in a manner that will certainly not meet with Mr. Bill Cosby's approval.  I guess you can call me "knucklehead".  Both my father and my brother are in prison serving long sentences for crimes that I will not discuss here.  I live in a project with my mom and my younger sister.   My mom is a good woman.  She works hard to make ends meet and to put food on the table.  It is very difficult to watch my mom struggle like that working long hours every day to provide for us.  In fact, it is one of the reasons I dropped out of high school.  I felt that my getting a job would provide her with the additional support she needs.  While I was going to school I went through the procedure for becoming a licensed security guard.  I figured I could work as a security guard and attend school at the same time.  It became difficult to do both, so I gave up the job entirely thinking that completing high school was more important.  The problem of insufficient income in the home still prevailed, and ultimately supporting my mom became a priority.  I dropped out of school at the beginning of my final year.

In addition to the pressure of needing additional income in our home, there was also the pressure from my peers, most of whom were drug dealers and gangbangers.  These were friends with whom I grew up and with whom I have formed very strong bonds.  I have no other friends.  Sometimes I would hang out with them until the wee hours of the morning, talking shit and getting high.  Of course this would often affect my performance in school, as I would not get homework completed and I was often too tired to attend school.  I knew what needed to be done, but I could not find the strength, motivation, or the will to perform that which I needed to do.  I tried going to church for a while; I tried getting involved in after school activities, but the pull of the street was always there.  It was oppressive.  It had a grip on me that is difficult to explain.  I had hoped to get my GED following my leaving school, but though my intentions were good, the task was easier said than done...
Posted by Ric Couchmam at 5:47:00 AM
Email ThisBlogThis!Share to TwitterShare to FacebookShare to Pinterest