"...Some Gentle People There" 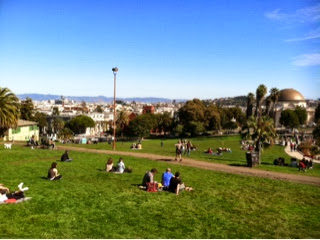 For the Presidents' Week's break my AP suggested that we spend four nights in San Francisco.  One of her dreams had long been to visit that city.  It was one of mine too, a desire inspired way back in the early 70's by that wonderful song, "If You're Going to San Francisco" (released in 1967 and performed by Scott McKenzie).   AP did not wear any flowers in her hair, but I did sport a rainbow-colored bandana covered with peace signs when we landed at San Francisco International Airport.  The experience we had in that wonderful city was beyond our expectation and simply unforgettable.

The weather was fantastic.  It was cool, not cold - a bearable kind of cool, quite the contrast from a cold, ice and snow-ridden, and rainy New York City.  It was supposed to be the rainy season in SF, but the gods were kind to us.  The trip allowed me to reconnect with my dear friend and fellow backpacker, Scott, whom I hadn't seen in 9 years.  We also had the opportunity to meet his soon-to-be wife, Shannon.  What an enjoyable time the four of us had exploring the City and wine tasting and dining in Napa Valley!  Summed up in one word? Memorable!  We also got to meet Daniel (my FaceBook friend) and his girlfriend, Danielle for the first time.  Yes! We did go to San Francisco (though not in the summertime).  And, yes!  We did meet "some gentle people there", at least four of them.  Just like the song said.  Thank you, Shannon and Scott.  Thank you, Danielle and Daniel.

[Photographic Art by Ric Couchman]
Posted by Ric Couchmam at 6:41:00 AM
Email ThisBlogThis!Share to TwitterShare to FacebookShare to Pinterest