Ted Nugent Caught in His Own "Stranglehold" 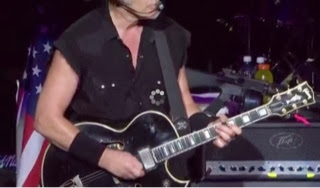 When we resort to name-calling it means we have ceased to think carefully and critically.  It means we have moved from attacking ideas to attacking individuals.  Attacking individuals instead of ideas is a way of avoiding rigorous thought.  It is declaring that we are "throwing in the towel" and leaving the debate.  It is declaring that we have exhausted our store of counter-arguments and that we are incapable of the continuance of reason.  By resorting (last month) to the name-calling of President Obama, rock musician, Ted Nugent was essentially signaling that he had given up on his argument to show that The President had lied (as he believed) to the American people and had abused his power.

Instead of sustaining his argument with reasons, examples, and details, Nugent launched into a personal attack on the President, calling him a "sub-human mongrel" and getting himself caught in his own "Stranglehold" of stupidity.  I will not jump on the band-wagon of those who have characterized Nugent's remarks about the President as racist, but what I know for sure is that he is a far better musician than he is a critical thinker.  And as far as the quality of his thinking is concerned, there is nothing there.  As such, any attempt to engage him about his unfortunate remarks about President Obama would be a complete waste of time and would attach too much importance to someone, who in the larger scheme of things, is of little or no significance.
Posted by Ric Couchmam at 5:38:00 AM
Email ThisBlogThis!Share to TwitterShare to FacebookShare to Pinterest