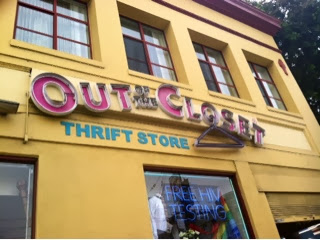 When I told my friend, Vera that I was spending Presidents' Week in San Francisco she immediately told me that I had to visit the Castro.  I had no idea what the Castro was.  She did not elaborate, and I went about my business.  A few days after AP and I arrived in SF, Scott's fiancée, Shannon, suggested that the Castro might be a good place to visit and that we had to try a cookie sold there made in the shape of a p€#*$.  We were all for it.  She also recounted how on one occasion as they were in a bar in that famous San Francisco enclave one of the patrons good-naturedly grabbed Scott's behind.  We even talked about my wearing ass-less chaps, but I wasn't having any of it, for I had a reputation to maintain.

Excited about the visit to the Castro, AP and I took the train to downtown SF and then took the Muni to the East side.  When we disembarked from the Outbound N two-car cable train, the first thing that caught our attention was a thrift shop named "Out of the Closet".  Awesome!  As we continued on our way we could not help but notice along the streets a number of LGBT flags fluttering proudly in the wind.  It was early afternoon and the streets were for the most part very quiet.  To our disappointment we did not find the store that sold the  p€#*$ candy Shannon recommended; however, I came away with an additional phallus (though a rubber one) courtesy of the  City of San Francisco, an embarrassed grin painted near its head, and a message at its base reminding me to be sure to get tested for STDs and HIV every six months.  Talk about a sense of humor.  You gotta love this City.

[Photographic Art by Ric Couchman]
Posted by Ric Couchmam at 6:49:00 AM
Email ThisBlogThis!Share to TwitterShare to FacebookShare to Pinterest