The "Mad Dogs" of Humanity 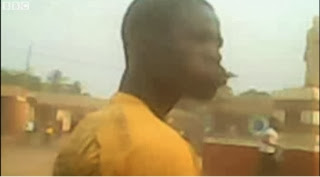 They call him "Mad Dog".  Several weeks ago he acted like one.  His real name is Ouandja Magloire, and he justified his action based on that which he claimed had been done to his wife and child.  Both were reportedly killed, the latter sliced in half.   I will not go into the details of the story with its ethnic and religious undertones; you, the reader can check out those for yourself.  I intend to pursue a different angle in this blog.  News of that which "Mad Dog" had done spread across the world.  Many, especially those of us from the so-called "civilized" nations, were shocked and appalled at his barbarous act.  And once the shock wore off, most of us probably shrugged and thought, "What else should we expect from people of that part of the world?"

The supposedly "less civilized" among us or the darker complexioned among the races do not have a monopoly on violence, on inhumanity to other humans, on perpetrating atrocities on other humans, or on acting barbarously towards other humans.  Humans, regardless of their moral sensibilities, their level of education, or their technological or civic advancements, seem to have a capacity for violence in the most extreme forms.   History is replete with the violent extremes (both on the micro scale and on the macro scale) of the educated and the uneducated, the religious and the non-religious, the uncivilized and the civilized, the moral and the immoral, the light-skinned and the dark-skinned.  So, while we must be appalled and angry at violence in all its forms and extent, we must not assume that extreme forms of violence is the domain of only the uncivilized, the uneducated, or the dark-skinned.

Posted by Ric Couchmam at 1:19:00 PM
Email ThisBlogThis!Share to TwitterShare to FacebookShare to Pinterest