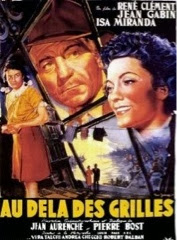 The 86th Academy Awards event is about four days away, and all the focus will be on the Hollywood films and Hollywood actors in the running to receive Oscar Awards.  I could care less about the Hollywood films.  My focus will be on the Foreign Films, as I eagerly await the one that will get the nod for Best Foreign Language Film so that I can add it to my collection. Among my large personal collection of Foreign Films is every Foreign film that has won the Oscar since the Academy first introduced that category in 1947.  One of those films is "The Walls of Malapaga" (Au delà des grilles - France/Italy 1950) directed by Rene Clement.

The film tells the story of a local Italian woman who finds a period of happiness when a stranger (a Frenchman) comes into her life.  The only trouble is that her young daughter sees the stranger as a threat to her relationship with her mother.  In addition, she finds out that the stranger is a wanted criminal.  For English-speaking viewers who do not know French or Italian, this film is not available with subtitles.  However, while that is a definite annoyance, it does not significantly interfere with the viewing experience.  Human emotions are universal, and the film's actors deftly communicate those emotions by their compelling performances.
Posted by Ric Couchmam at 5:26:00 AM
Email ThisBlogThis!Share to TwitterShare to FacebookShare to Pinterest