The Mistreatment of the Rich 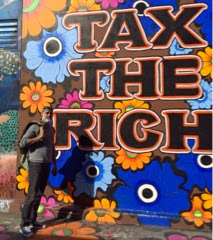 Tax the Rich.  That's what everyone but the Rich seems to be saying these days.  Why would we want to do such a "horrible" thing to another person?  New York City Mayor, Bill de Blasio has also jumped on the "Tax-the-Rich" bandwagon because he wants them to pay for universal pre-kindergarten.  Now we need to be careful here and not get carried away.  Cooler heads must prevail.  Let's face it, the Rich "run things", and we don't want to go pissing them off by taking their "hard-earned" money away from them.  I would be pissed off too if someone were threatening to take some of my money away.  That's also bullying, and bullying is wrong.  When the Rich is threatened with taxation, it's like declaring war on them, and we all know the evils of war.

Taxing the Rich will also adversely affect our politicians, and God knows how important those people are to us.  Behind every politician is a wealthy person, and taxing the Rich will cause them to withdraw their financial support for our needy politicians.  Further, if we want the game to continue, we can't piss off the person who brought the ball to the game.  He or she will take his ball and go play elsewhere.  Tax the Rich and they will close up shop and take their business elsewhere.  We can also say goodbye to philanthropy.  Why we would want to do that beats the hell out of me.  All those "Foundations" will come crumbling down, and all those "Endowments" will no longer be endowed.  My mother always used to say, "Don't bite the hands that feed you."  We should leave the Rich alone because one day we will become Rich too, and we will not want anyone threatening us with such a terrible thing as taxation.

[Photograph by Angela Pereira]
Posted by Ric Couchmam at 6:15:00 AM
Email ThisBlogThis!Share to TwitterShare to FacebookShare to Pinterest