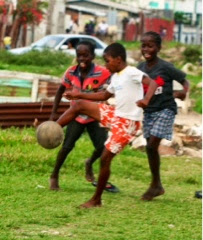 You have just got to love the FIFA World Cup 2014.  It has done some strange things in the past several days.  Among its many positives is its ability to break down barriers, provide a common ground for interaction, remove inhibitions, and to bring people together.  And all it takes is to wear the jersey of your favorite team or to find yourself watching the games on TV in the company of total strangers.  In the days immediately leading up to the World Cup and the days following, I have had exchanges or conversations with strangers on the street, on the train, and in restaurants far more than I have had all year.  For example, there are three individuals who have been working in my school's neighborhood for the past several years, individuals whom I have seen and with whom I have made business transactions with nothing more than a "Good morning" between us - a street vendor from Mali, a deli worker from Mexico, and a restaurant manager from Italy.  The World Cup changed that.  Listening in on our conversations you would think we are old friends.  Well, we have become friends, and our greetings are filled with more warmth and meaning.  I know of no other major sporting event that does this, not the Olympics, not the Tour de France, not the NBA playoffs and championship, not the Super Bowl, not the playoff and championship of Major League Baseball.  When all is said and done we have more in common, more that are grounds for bringing us together than that divide us.   Go Guyana :-)  Go USA! Go Brazil!  Go Mexico!  Go Costa Rica!  Go Italy!  Go Ghana!  Go all the other teams in the 2014 FIFA World Cup!

[Photo Art by Ric Couchman]
Posted by Ric Couchmam at 10:22:00 AM
Email ThisBlogThis!Share to TwitterShare to FacebookShare to Pinterest