Sectarian Violence in the Time of the World Cup 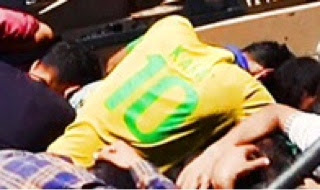 While the rest of humanity is caught up in the fever of the FIFA World Cup 2014, a group of ultra-fundamentalist jihadists, calling themselves the Islamic State in Iraq and the Levant (or ISIS), are making their way through that unfortunate country, leaving a trail of destruction and death.  The Prime Minister of Iraq, Nouri al-Maliki, is desperate and is looking to President Obama who has pretty much said that Maliki should take care of his own problem - a problem for which both President Obama and Former President Bush should bear full responsibility.  Sadly, the Iraqi people must again endure the devastating results of war, impending sectarian conflict, and face abandonment from a country that is, in the first place, responsible for their current sufferings.

Just a few days ago, ISIS, according to reports, captured hundreds of Iraqi soldiers, tied them up, and shot them as they lay in a ditch.  Some of the photos were posted on the group's website.  One photograph, in particular, struck me.  It was a photograph of several young men (possibly teenagers) tied up and lying face down in a truck.  One of them was wearing a yellow and green jersey (mostly yellow) with the number 10 printed boldly on it and with the name KAKA just above the number.  Most likely, the young man is a football enthusiast and a fan of Team Brazil, and his favorite player is the once formidable Brazilian striker, Kaka.  Clearly, the young man is aware that the World Cup is in progress, and, like thousands of fans around the world was demonstrating solidarity with his favorite team.  Sadly, though, he might not live to enjoy the rest of the World Cup.  He might very well be dead by now, his life brutally snuffed out by cruel extremists who were not even in his country when it was invaded by the so-called Coalition forces.

Looking at the young man lying there among the other young men and wearing his football jersey, one cannot help but be touched by that bit of humanity amidst all that brutality.  Violence, whether initiated or reciprocated gets us nowhere nor does anybody any good.  In the meanwhile, back to that temporary distraction that is the 2014 FIFA World Cup.
Posted by Ric Couchmam at 6:33:00 AM
Email ThisBlogThis!Share to TwitterShare to FacebookShare to Pinterest