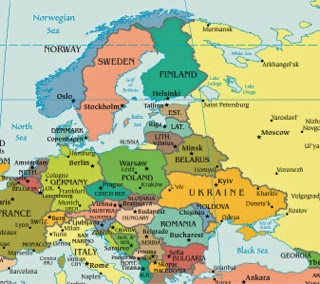 President Obama, his NATO cronies, and President Putin are all behaving like little children rather than like thinking adults at the moment.  They are busy playing war games in the Baltic region, with Obama and his allies trying to intimidate Putin, and Putin, on the other hand, trying to show he can stand up to them.  As my mom used to say, "You play with fire, you will get burned."  Right now these supposedly grown adults, like little children, are playing with fire.  Someone is bound to get trigger-happy and pull a trigger, and before you know it we might be looking at another World War.  What's wrong with these men (and Angela Merkel)?  How foolish can they be?  Already with destroyers participating in alternating patrols in the Black Sea, Obama has now sent two B-52 Bombers to join the war game (called Saber Strike) now in progress in the Baltic region.   This is in-your-face posturing.  Not to be out-done, Putin has started his own war game involving naval groups, marines, and airborne forces.  This kind of posturing, flexing of muscles, and machismo, combined with verbal threats is beyond ridiculous.  And what is more is that the major media seem to be in the forefront fanning the flames of conflict.  I am calling these men and Angela Merkel to account, since I do not hear anyone else doing so.  If there are others who are already doing so, then I stand corrected, and I would like to add my voice to theirs.  I say to you, President Putin, President Obama, heads-of-state of Latvia and Lithuania, heads-of-state of the other NATO countries:  That which you are all doing is wrong!  STOP THIS NONSENSE!  I beg you, STOP THIS INSANITY!  Act like sensible adults.


Posted by Ric Couchmam at 7:29:00 AM
Email ThisBlogThis!Share to TwitterShare to FacebookShare to Pinterest