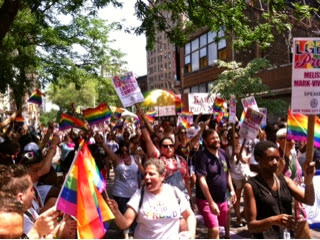 The text message I received read as follows: "Dad, are you still going to the parade with me?"  I had completely forgotten about this.  A year ago, my younger daughter, Kara-Joi, had asked if I would be willing to go with her to this year's Gay Pride Parade in New York City.  I had replied, "Absolutely!"  Now the parade has come and gone, and I still haven't gotten over the thrill, the excitement, the euphoria of that most delightful experience.  And what a memorable experience it was!   Two things stuck with me. 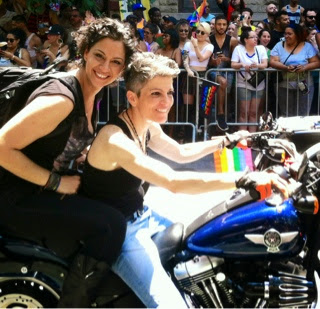 First, I did not see lesbians, gays, bi-sexuals, or trans-genders at the event.   I saw only human beings - beautiful, made-in-the-image-of-God human beings.  While the event was billed as a celebration of Gay pride, I saw it as an amazing celebration of differences - individual differences.   The feeling in the atmosphere was joyous, festive, pure, sacred.  There was a kind of bonding between participants and spectators, a bonding among all the people gathered there.  There were no agendas.  There was no hate, no intolerance, no inhibitions, no fear, no ignorance.   I saw self-expression in all its creativity, in all its charm, in all its beauty, in all its simplicity, in all its freedom.   There were smiles, laughter, cheers, hugs, blown kisses - those little human things from beautiful humans beings. 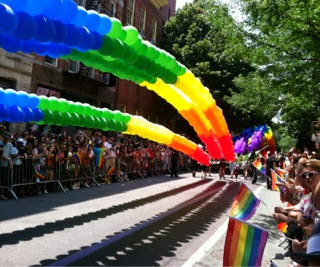 Secondly, the variety of looks on my daughter's face was priceless.  I got caught up in her excited impatience as things were running late.  I got caught up in her screams of delight as she vigorously waved her rainbow-colored flag as the parade passed by. I watched her, and I felt her joy, her pride.  Amidst all the cheers, the screams, and the loud music, I put my arm around her and asked what being at the event meant for her.  She looked at me and said, "For once, I can wave this flag and not feel ashamed, Dad."  With pride, I kissed her on the forehead.  She was my daughter, and I identified with her.  And with pride I also identified with everyone present at the event.  I was gay for that day and damn proud of it.

[Photo Art by Ric Couchman]
Posted by Ric Couchmam at 5:54:00 AM
Email ThisBlogThis!Share to TwitterShare to FacebookShare to Pinterest