The Transience of Things 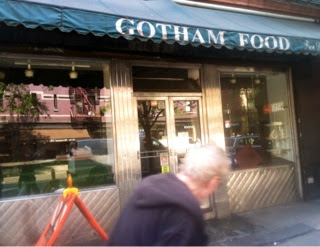 Just around the corner from the school at which I work is a 24-hour deli named Gotham Food - or I should say "was a deli".  When I first started working at the school over twenty years ago Gotham (as it was called) was already there.  The owner was Greek, and all of his employees were either from Mexico or Central and South America.  For the most part, the deli's patrons were contractors and construction workers working in the apartment buildings in the neighborhood which is home to the likes of Robert DiNero, Kevin Bacon, Yoko Ono, Christiane Amanpour, Dustin Hoffman, Woody Allen, and other celebrities.  About two weeks ago I showed up at the deli to grab a cup of coffee (I had determined that the coffee sold there was far better than that sold at the Starbucks next door or at the other nearby cafés.).  To my surprise it was closed.

I assumed that the deli was under repair or some such thing.  The owner happened to be standing in front of the store, and I asked him what had happened.  He looked at me with a painful expression on his face ad said plaintively, "We don't belong here anymore."  I found myself thinking, "Of course 'we' don't belong here.  This was the upper Westside of Manhattan."  I asked him what he meant, and he told me that he could not afford the new monthly rent that was being asked of him to pay.  I took a quick glance at the Starbucks that adjoined his deli; business was good.  They could afford to pay the rent and then some.  He had no immediate plans, but at that point he had the entire world on his shoulders.  I wished him well and turned to go elsewhere to buy my cup of coffee.  For a fleeting moment I thought of how quickly I sought an alternative.  Indeed, life goes on.  Gotham was quickly becoming a mere memory.  I could adapt to the watered-down coffee of the other cafés.  Ah...the transience of existence.
Posted by Ric Couchmam at 8:43:00 AM
Email ThisBlogThis!Share to TwitterShare to FacebookShare to Pinterest