Coconut Water - The Taste of Paradise 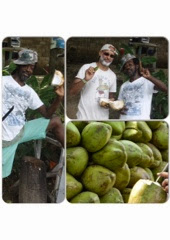 Whenever the gods are thirsty, their thirst-quencher of choice has to be 'the' coconut water.  There is nothing like it, that sealed vault of translucent liquid that is the delight of those living in Guyana and other tropical countries, and the delight also of those from the temperate zones who have been introduced to its refreshing taste.  It is the taste of paradise.  Before actually partaking of the cool draught, the preamble is itself a delightful spectacle.  One is treated to an impressive display as the coconut vendor (with his machete) deftly slices off the top portion of the fibrous husk, getting close enough to carve out a hole and exposing the precious liquid inside.  A drinking straw is inserted into the opening, and the vendor then hands over the coconut to the thirsty patron.  Of course there are those purists who will say that the use of a straw is not the proper way to drink a coconut water.  The proper way is to put your mouth directly to the hole, tilt your head back, and gulp down the contents as some of the cool flow trickles down the sides of your mouth.

But there is another part to that one-of-a-kind, thirst-quenching experience.  After consuming every last drop of the heavenly liquid, most buyers would put a probing forefinger into the opening to ascertain whether there were the soft, delicious, milky white substance present.  The coconut, sans its liquid, is then handed back to the vendor who splits it in two with his machete, slices a small wedge from the side, and returns the two halves to the patron who then proceeds to scoop out the rich jelly with the wedge which serves as a spoon.  Some like their jelly thick and somewhat dense, and others like it soft and of fluid consistency.  In Guyana, stopping at the side of the street and buying a coconut water is an event, enjoyed against the backdrop of a cultural understanding which sees the drupe as being good for one's kidneys, or (with a few drops of "steel drops" added) as being good for "a man's back", suggesting the enrichment, proliferation, and copious flow of his procreative substance at the climax of copulation.  Whenever I touchdown in my beloved country, or in neighboring Brazil, or in any of the Caribbean islands, a coconut water is the first thing I desire.  It is truly the taste of paradise.

And then there is cane juice.  But that's for another blog post.
Posted by Ric Couchmam at 10:26:00 AM
Email ThisBlogThis!Share to TwitterShare to FacebookShare to Pinterest