The Revolution Has Been Compromised 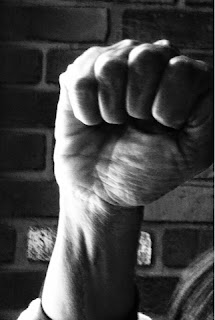 So much for the Revolution not being televised;
The Revolution, my brother, has been co opted.
For shaking the religious and political foundations,
The Revolution was nailed to a cross in humiliation,
Then repackaged with other-worldly expectations.

The Revolution, my sister, has been co opted;
It has become a fashion statement, printed on garments.
The face of the bearded one in black beret, merchandised,
The face of the black man with glasses, now a mere cliche,
"Imagine" now fills someone's coffers than fulfills the Dream.

The Revolution, sisters and brothers, has been co opted.
It has been designated a national holiday on January fifteen.
They now call it Mr. President, the Commander in Chief,
Gave it a make-over, adorned it with a kinder, gentler persona,
Gave it a script, gave it a TV show, allowed it a seat in the front row.

I told you, brothers, that the Revolution has been co opted.
Evicted from its occupancy of Wall Street, unwelcome there.
That hope of Spring and all its promises crowded out by Winter,
High expectations that blossomed in Tunisia crushed in Egypt,
Muted, put in its place, caught in the "choke-hold" of the status quo.

Remember I said, sisters, when the Revolution was released,
After eighteen years on Robben Island, how I said that it were better,
Better that the Revolution had died in prison, had not been set free?
The Revolution meant more to us incarcerated, a symbol of our struggle,
But now the Revolution is remembered merely as a nice, old man.

Posted by Ric Couchmam at 2:09:00 PM
Email ThisBlogThis!Share to TwitterShare to FacebookShare to Pinterest