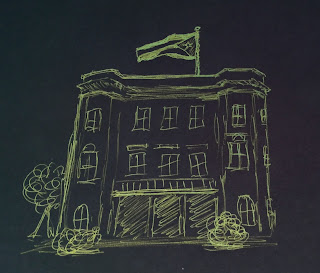 So yesterday's raising of the Cuban flag and the re-opening of the Cuban embassy received a lot of attention in the media, with analysts hailing the event as historic. Nothing historic about it from my point of view. The U.S. should not have broken of diplomatic relations with Cuba in the first place. It was a stupid move done only because the U.S. did not approve of the direction Cuba was taking. So much for sovereignty and self determination. This largely symbolic arrangement intended to begin the process of normalization is nothing short of President Obama's frenzied rush to leave his "legacy". He squandered a golden opportunity in September last year to leave a far more solid legacy when he signed a document extending for another year the embargo against Cuba, saying that it was in America's interest to do so. He had the opportunity to put his money where his mouth is; he should have refused to authorize the extension. What was even more puzzling was that three months after extending the embargo he called on Congress to end the embargo. Are you kidding me!? Talk is certainly cheap.

If the U.S. really desires to re-establish relations with Cuba it must reject following its policy of seeking the destruction of the Cuban Revolution and the toppling of the Cuban regime. Those have been its objectives for the past 54 years, with every means employed in attempting to achieve them, including terrorism, invasion, bio warfare, economic, financial, and commercial blockade, propaganda, and infiltrations. Destruction of the Revolution and regime change are still it objectives today, sought through new means since as President Obama said, "The old ways haven't worked." The President can have at seeking to put in place inconsequential, last-minute legacies. However, if true re-establishment of relations is desired by the U.S., nothing short of the following will be required: recognition of Cuba's sovereignty and it's right to self-determination, bringing the embargo to an immediate end, making restitution for the suffering caused to the Cuban people as a result of the hostile U.S. policies, and immediately bringing to an end the occupation of Guantanamo Bay.

[photo art by Ric Couchman]
Posted by Ric Couchmam at 10:14:00 AM
Email ThisBlogThis!Share to TwitterShare to FacebookShare to Pinterest