The Little Boy and the Fat Man
by
Ric Couchman 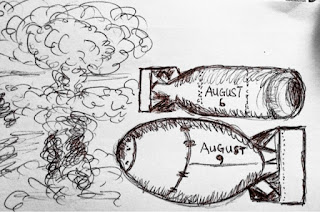 Where are you going, Little Boy?
Where is Miss Gay taking you?
She is taking me as the substitute -
The substitute for an invasion.
I go to the land of the rising sun
To participate in a murder -
The murder of innocence,
The vaporization of the innocent -
To take mothers from children,
To take children from fathers,
And brothers from sisters.
I will bring a gift of firestorm,
And in its aftermath - black rain
And in its wake - contamination,
Leaving charred and black bodies,
Faceless bodies, disfigured bodies,
Screams and pain and melted skin.
The dead will litter the streets.
I will leave smoking ruins, ruined lives -
The carnage will be complete -
Shattered windows, shattered lives -
The city's destruction will be complete.

Where are you headed, Fat Man?
And why are you squeezed in a box-car?
I am nothing but an experiment
On some slant-eyed guinea pigs
Whose lives matter little.
I am headed west to the Far East
Just for a bit of a crime spree,
On a mission of incineration,
A catastrophic annihilation
To take children from mothers,
To take fathers from children,
Husbands from wives,
Wives from husbands,
And sisters from brothers.
I will bring clouds of smoke;
I will bring a foam of flames.
A trail of blood will I leave,
And a chorus of anguished moanings
From the lost and injured
Will serenade those already dead.
Bodies without limbs,
Bodies with exposed flesh,
The helpless rubble of dead buildings,
Will adorn the grey landscape.
I will leave a stench of suffering.
I will leave painful memories.
I will leave a city of ruined souls,
And I will leave my guilt there.

Posted by Ric Couchmam at 10:05:00 AM
Email ThisBlogThis!Share to TwitterShare to FacebookShare to Pinterest