Time to Tear up the Meaningless United Nations Charter --- 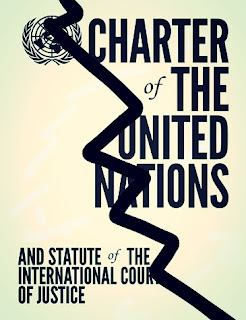 These three rogue states, in virtue of their breach of and their utter disregard for international law, have shown the rest of the world that they can act with impunity and that there is no institution or nation state that can do anything about it - certainly not the United Nations. Sadly, then, it means that in our current world no international norms or rule of law exist. The American regime (in consort with vassals Britain and France), arrogating to itself the role of acting on behalf of the international community and the role of world policeman under the pretext of questionable neo-humanitarianism, has shown that it is a law unto itself and that it will impose its will on the international community whether its members like it or not. In sum, the only right that now exist in our world today is the might of the American regime, and the only law operative in our world today is the will of the American regime. And any nation of the world that resists its might and will, does so to its own peril. A sad state of affairs indeed.

[photo art by Ric Couchman]
Posted by Ric Couchmam at 6:49:00 AM
Email ThisBlogThis!Share to TwitterShare to FacebookShare to Pinterest